The Down and Dirty on Diapering

This is a guest post from Stewart, aka "Papa":

Earlier this summer, I happened to catch an interview on sports radio of New York Jets running back Shonn Greene. At the time of the interview, the NFL lock-out was still in place, so Greene wasn’t permitted to work-out with the team in preparation for the upcoming season. He was on the radio instead to promote a big barbeque being held in the city for first-time fathers, sponsored by Pampers, that Greene and some other local celebrities were hosting. He mentioned that he is a first-time father himself, with a 7 month old son at home. Given the NFL lock-out situation, the radio interviewer jovially asked Greene whether or not, with all of his unexpected free time, he was keeping busy by changing his son’s Pampers. Greene laughed and said essentially “all but the poopy ones” -- which he left to his wife.
Jacob pointed out to me that this was a rather curious response for a man promoting a Pampers event to give -- “Pampers – best left to your wife!” -- and likely not the message the execs at the diaper company were striving for in pushing their brand on new dads. But I was more chagrined by the fact that he is skipping out on one of quintessential experiences of parenting a baby. That’s right, my entirely unsolicited advice for the Jets running back is this: You’re missing out! Change some poopy diapers!

I have been an uncle for approximately 10 years now, and throughout the first few years of each of my niece and nephews’ lives, whenever I saw them I was encouraged by family to change their dirty diapers. My family told me that far from them pushing on me a thankless job, they were actually doing me a favor -- taking on this role would afford me the enviable opportunity to embarrass my niece and nephews for time immemorial with the classic retort to any of their later flack: “I used to change your diapers!” While that was all well and good, I remained suspicious that the real motivation of their pep talk was simply to get out of changing a diaper. Now that I am a parent myself, I am sure of it. I must admit that there have been times when we’ve had guests over to see Max, and he decides to drop a little present into his diaper, that I’ve been tempted to continue the family tradition of “re-gifting” that present for our friends to handle.
﻿﻿
So, armed with my suspicions, I never did change my niece and nephews diapers. After all, one of the great perks of being an uncle or aunt is that you get to spoil your nieces and nephews as much as you want. You become their favorite, and the second an inconvenient or undesirable parenting moment arises -- like a full diaper -- you get to hand those smelly little tykes back to mommy or daddy. 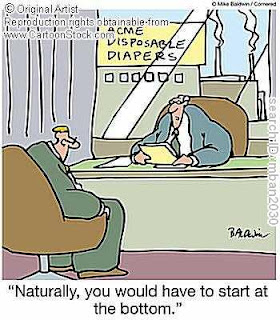 There was one exception. About two and a half years ago, I was asked to babysit my then two year old nephew Luke for an evening -- alone. Before leaving, his mother rattled off Luke’s nighttime routine, which included, if necessary, changing his diaper before bed. I just kept nodding: “oh yes, of course of course.” Well, when that fateful bedtime hour hit and it was time for Luke to get into his PJs, I realized I had no idea how to know if this change in ensemble required a diaper change. Or, more importantly, how to perform it. At this point Jacob and I knew that parenthood was in our future, so I decided I better go for it, before poor future Max became my guinea pig. Of course changing an active 2 year old is a little different from changing a sleepy, sedentary newborn. I ended up changing Luke in the bathroom while he was standing up and chattering away about whatever he was into at the time (trains, most likely, but I was too focused on the daunting task at hand to listen properly). It turns out that changing a child while he or she is standing up is a fairly unorthodox and advanced diapering technique, and I was way out of my league. And, wouldn’t you know it, his original diaper was dry and didn’t need changing after all. Too late. Thankfully, Luke didn’t seem to mind my fumblings with the tabs of his new diaper, or puzzlement over which was the front end and which was the back, or the sad, droopy end result that he wound up wearing under his PJs as a result of my ineptitude. But, while I was nervous all the next day that I would get a phone call from his mother about the plastic trainwreck I had patched around her son’s butt, the call never came and I breathed a sigh of relief. I had done it!

With Max in my life, I must have changed a thousand diapers by now -- of every degree of wetness and of every shade and consistency of poop. I’ve changed a poop in the men’s room of a highway rest stop in the middle of nowhere while feeling the collective stares of the truck drivers passing through as I sang “twinkle twinkle little star” to Max to keep him calm enough for me to finish the job. I’ve changed a poop in an airplane bathroom that had no changing table and was so small I could barely bend down to maneuver. I’ve changed a poop while wrestling Max on my lap while sitting on the toilet of a public restroom because the sink was too small and the floor was wet. And I’ve ventured into the women’s restroom to get the job done, stressing all the while over the reaction I might get from the ladies who could walk in at any moment. And as long-time readers of the blog know, Jacob has had his own diapering misadventures with Max, as chronicled in this early post, as well as this one.
I know that I am far from alone in these experiences, and I’d love to read in the comments about your own diapering fiascos. But how are these experiences an endorsement for being an active participant in cleaning your child’s diaper messes? Put simply: it’s character building. It is not an exaggeration to say that in these small, trying moments of parenthood I’ve felt a particular closeness with Max, perhaps resulting from an intimate embarrassment shared and survived. I’ve also felt a palpable sense of accomplishment in carrying Max out of a restroom and back into the world looking perfectly clean and content, and me acting perfectly nonplussed, when in reality the past five minutes of changing his dirty diaper felt like fifty, with neither of us having any desire to re-live a single one of them. So Shonn Greene may think he’s making out by leaving the dirty diapers to his wife, but I strongly disagree. You may sacrifice a little of your dignity in the process of changing them, but it grows back stronger – like breaking down muscles in the gym in order to pump them up. Surely a pro football player like Shonn Greene can appreciate the value in that.
Posted by Jacob at 3:11 PM 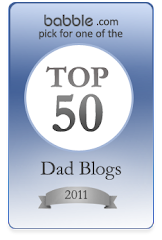 Jacob
New York, New York, United States
My husband, Stewart, and I live in NYC with our newborn son Max. Max was conceived and raised in the womb by his amazing surrogate mother, who lives with her family outside of Atlanta, GA. Since Max was born there on May 8, 2010, it's been entirely up to Stewart and me to raise this little bugger, and that's what this blog is all about! As the designated stay-at-home daddy, my life has become a constant whirlwind of cat-naps, diaper changes, 3 am feedings, and a million other parenting adventures! I hope you enjoy reading all about them, all from the unique perspective of Max's gay daddy -- aka "gaddy"!